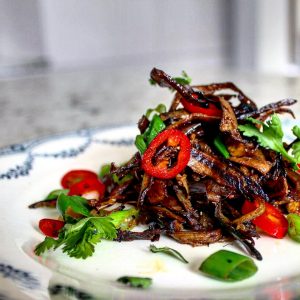 Since the start of the year, The Pitt family has taken up the challenge of not buying anything in single-use plastic packaging. We first did this for a month in 2014 – not quite during Plastic-free July, but just after, as a practice run for a year long challenge of living without single use plastic packaging for the whole of 2015.  We’ve kept many of the habits we formed during that year, but we noticed that plastic packaging was creeping back into our lives. Time to renew the vows…  But oh dear! That meant no more crisps.

However, while on holiday with my family last week we had a temporary reprieve of our ban on eating crisps – or “illegals”  as my family now call them. The decision was taken because we had quite a stock of “illegals” leftover from birthday celebrations last year and from Christmas, that were not being eaten.  I don’t want to waste food, clearly! So I decided to raid the cupboards for illegals and add them into the holiday baggage.  I didn’t think they would even outlast the journey, but they did!

As we came to open them up, we found two packets that were beyond their “Best Before” date.  We only noticed this, because they didn’t taste very good. They were perfectly crunchy enough, just not particularly nice.  We decided they would be better used added to nachos or a pasta dish as a topping, so they came back home with us.  Strangely, having forgotten about that by the time we got home, we unwittingly gave them second chance and the flavour had opened up bit and they had definitely improved. Now that doesn’t usually happen with crisps, does it?

The second “out of date” packet was perfectly fine.  That’s the thing about “Best Before” dates – food will often perfectly fine well beyond the date.  It is not in any way a health and safety date, but it is an approximate guide to help us enjoy whatever the product is, before any deterioration in colour, texture or flavour.  I often call them “Best Ignored” dates.  If I find something out of date, I try to make a point of using it as quickly as I can, but I will never just bin it.  I will open it, smell and taste it, and then if it needs a little help I’ll use it as an ingredient to make something of it.  Hence the crisps as pasta topping.  It reinvigorates soggy crisps!

But what about the banana skins?  We saved our banana skins throughout our week away, to make a banana skin curry.  We had more than we needed for the curry, so we fried up the rest as our pre-dinner snack.  Lorna Hall has a lovely recipe for banana skin crisps in Leftover Pie (page 184) along with other suggested uses of banana skins, such as curries. We didn’t have fresh chillies or spring onions, so our recipe was a simplified version of the one in the book, using olive oil, salt, pepper and paprika.  It worked well. As we had eight banana skins, and three were enough for the curry, we needed to cook the crisps in batches so as not to overcrowd the pan.  After cooking up a couple of batches, we decided to experiment with cooking them in the oven, so the remaining skins went into an oven-proof glass dish, were drizzled with oil, and sprinkled generously with salt, pepper and paprika and then left to their own devices in the oven at 180 degrees, while we ate our curry.  I think they were probably in the oven for around 40 minutes, with just a brief glimpse at them after maybe thirty minutes. When these were cooled I put them into a tupperware container in the hope they would be still good the next evening. The good news is they were and they had actually crisped up a bit more as they dried out. Good to know.

I haven’t cooked enough skins before to have any left to find out how they keep, so this is a new one to me.

In case you were wondering how we were accumulating our banana skins day by day, we just put them in a bowl in the fridge and we were on day 6 of our holiday when we cooked them. If you don’t eat bananas often and want to save up a few to make a curry and some crisps you can pop them in the freezer until you want to use them.