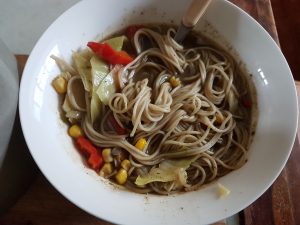 Last weekend when the weather was still cold and miserable, we had our usual roast dinner on Sunday evening.  We generally plan to have leftovers, that we can use up throughout the week.  On Tuesday I foraged in the fridge for some lunch and found the leftover veg.  I thought it was odd that there was no gravy left, but I ate my veg gravy-less and enjoyed it none-the-less.

The next day I found the gravy! When I say “found” …well it was in the fridge staring at me as soon as I opened the door.  I can’t think why I had overlooked it the day before, but that “can’t see for looking” expression comes to mind.

I wasn’t sure how I was going to use up the gravy as I didn’t really have anything to go with it.  My usual way of using it up would be to eat it with leftover meat and veg, just as a second opportunity at roast dinner, or to make it into a pie. The classic Pitt family “Leftover Pie”, of course!

On Thursday I was walking past the market at closing time so I seized the opportunity to buy up some cherry tomatoes and romano peppers that needed a home – way more than I would normally buy, but there are lots of ways of using them, so I knew I could save them from being wasted.

One of the things I love about having a mindset of using everything up is that you get inventive and sometimes you end up with a new recipe through lucky accident. Like my serendipity fig rolls (page 209 in Leftover Pie), I now have a serendipity soup.

On Friday, I made a curry with plenty of pepper and tomato in it, and as I was chopping the peppers I was reminded, for some reason of an asian style noodle broth I’d had with romano peppers in it.  Ah! That might be a good way to use up the gravy!  It certainly was and it was so simple and delicious I will have to do it again.  Here’s how..

I reheated the gravy – there was about 300ml, so I added about 100ml of water to it.  I popped in some egg noodles, then the diced romano pepper, some strips of white cabbage and half a tin of sweet corn that I had left over from lunch the day before.  It took me less than ten minutes to make.  Definitely one to remember.