The decade that circular becomes mainstream 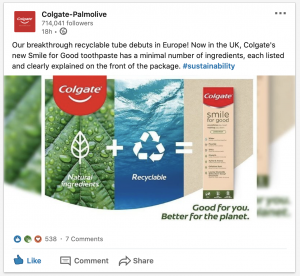 We have a new decade so let’s make this the decade when sustainable circular economy principles become mainstream.

I used to think that with my (nearly) Zero Waste lifestyle, putting my residual waste bin out for collection just once a year, I was one in about 0.003 percent of the population. Now I feel my lifestyle is far less weird. Hey! I’m almost trendy. This is only based on what I feel from what I see around me, but I reckon I’m one of almost 30% now who won’t buy something if it is going to create waste. I use the term “waste” as lost resources rather than recoverable, reusable resources.

We do know that we are not playing fairly with our current rate of using up resources. And as a species we can’t keep doing this. Most people acknowledge that now, and where it hasn’t already, it soon will start to strongly effect the way people spend their money.

Businesses are seeing that, acknowledging that.

It started off with a few people realising the need to change, to waste less and make better use and reuse of resources, rather than using up resources and throwing them away.  Some saw great business opportunities there and brought out tempting products that were easy on our conscience but still let us indulge our needs and wants with stuff we buy.

I am fully in support of those businesses, but my only concern there is where people are buying stuff to replace something perfectly functional that they have already. Still, it’s bringing about a sea-change.

A while ago, I was invited by Colgate to give input in a sustainable product design workshop. It was a fascinating insight into bring ideas to market. What I really liked was that they agreed that I “don’t hold back”, that I tell it how I saw it.

So I didn’t hold back. I was worried at first that it was really just a trendy lifestyle thing, but they really listened and dug deeper and asked lots of questions. I talked about the circular economy and about the recyclability of various packaging materials. And did I say… that they listened! And I’ve just seen what they’ve done and I’m doing a little happy dance.