Here’s your opportunity to get a plastic free aisle in supermarkets!

And many of us would like to change that.

But it takes commitment, certainty and consistency.

I know what it’s like to start a campaign from scratch. And I know what can be achieved with passion, energy, consistency and the commitment of a group of people working towards the same goal.

That’s why I was intrigued to speak to John Higginson this week.

John runs a PR company and is working with a grassroots organisation called “A Plastic Planet”.

Their aim is to see a Plastic Free Aisle in supermarkets.

Founders Sian and Frederikke believe supermarkets and brands will respond to consumer choice and they have faith that enough of us want to be able to shop with convenience but without once-use plastic packaging.

Before you think we’re a minority without a chance, let me tell you something exciting.

According to scientists, it requires only 10% of a population to be consistent and committed to an idea, before it becomes inevitable that it will eventually become the prevailing opinion of the entire group.

Remember that next time you’re beating yourself up for not doing enough and wondering how your ‘little bit’ can have any significant impact!

So I’m going to take the liberty of assuming you’d love a plastic free aisle in your local supermarket.

Here’s how you can become one of the 10% that influences the majority:

Fed up of living on a plastic planet?

With a meeting with Tesco already in the pipeline, A Plastic Planet need your help. They’re collecting 2050 films of people like you demanding change, which they will present to the CEOs of the biggest supermarkets to demand a Plastic Free Aisle. Why the quirky number? According to the Ellen McArthur Foundation there will be more plastic in the oceans than fish by weight by the year 2050. Think about that for a moment – it’s pretty horrendous, isn’t it?

If you’re suitably horrified and want to be part of the solution – here’s how you can be influential in bringing a plastic free aisle into reality:

(Incidentally, many people are getting increasingly overwhelmed and concerned about what they can do to support the environment and waste less stuff. If you’re feeling overwhelmed to a point that its affecting your mindset, or you’re unable to sleep, do get professional help. For example, BetterHelp.com offer online counseling).

How to get a plastic free aisle in supermarkets

Film yourself on your phone saying: “My name is [First Name]. I am a Plastic Addict but I am ready for change. I want a Plastic Free Aisle.”

Once you’ve done that copy and paste the following message onto your Facebook timeline along with your video. To help it go viral nominate three friends to do the same.

“I’m backing A Plastic Planet’s campaign to get a #PlasticFreeAisle in supermarkets. Plastic is killing our planet and will affect our health. There’s little we can do on our own but supermarkets respond to consumer demand. As a consumer I am asking for a plastic free aisle where I can shop guilt and worry-free.

A Plastic Planet are collecting thousands of films of ordinary people demanding change, which they are bringing to the CEOs of the biggest supermarkets to demand a Plastic Free Aisle.

After you’ve done that either email your film to [email protected] or tag them on social media with the hashtag #PlasticFreeAisle. You’ll find them on Twitter  Facebook  and Instagram

That’s all it takes to change the world. Who said a zero waste lifestyle was difficult 😉 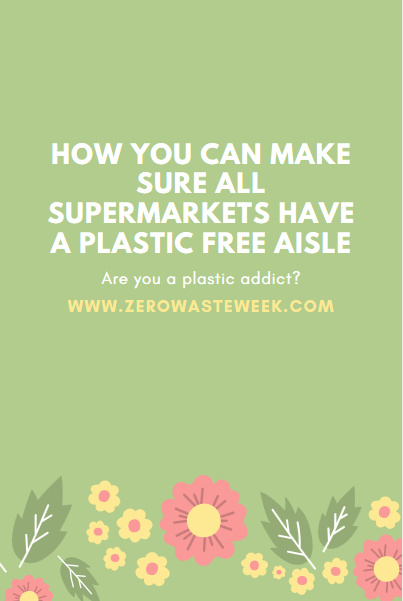