We were contacted by the Galloway Glens Landscape Partnership Scheme, a National Lottery Heritage Fund supported project who are hosted by Dumfries and Galloway Council.

Dumfries and Galloway Council have set an ambitious target of being a net zero carbon region by 2025, and the Galloway Glens are keen to support this through their work in the communities of rural SW Scotland. They therefore created Galloway Footsteps – a series of 4 online events showing how people living in Galloway could make individual decisions that reduce their environmental impact, based on the themes of What We Buy, What We Eat, Inside the Home and Outside the Home.

The focus was very much on creating the inspiration to take action and then giving clear measurable steps that would really make a difference. Four events were held online over 4 months. They were free to attend and consisted of an inspirational speaker, plus top tips about what actions people could take locally to follow up on the ideas generated.

The Galloway Glens team contacted us to host a webinar for their first event entitled ‘What We Buy’. The idea was that to remind everyone that amidst the gloom of the current global context, there is a key point often overlooked – the power of us as consumers. Anna’s track record in reducing her waste footprint was inspirational, and the team were delighted when she was able to launch the programme with them. About 100 people attended Anna’s event, which initiated the programme and led to the creation of a small group of committed people looking to reduce their footprint – Team Galloway.

Helen Keron, Galloway Glens Education & Community Engagement Officer said, ‘Anna’s personal story and her work with Zero Waste Week is genuinely inspirational. The credibility that she brought to this topic, which can seem overwhelming at times, was a huge part of the success of the event. We’d like to thank her for joining us all the way from Germany, and we are very pleased to report that Galloway Footsteps has led to Team Galloway together committing to reduce over 35 tonnes of carbon over the next year, as measured through our partner Giki.’

Team Galloway began in May 2021, and since then has grown to a small but committed cohort of 41 people who between them have:

So this really comes back to the overall theme of Galloway Footsteps – that the individual actions we take do make a difference, and that knowledge is power. 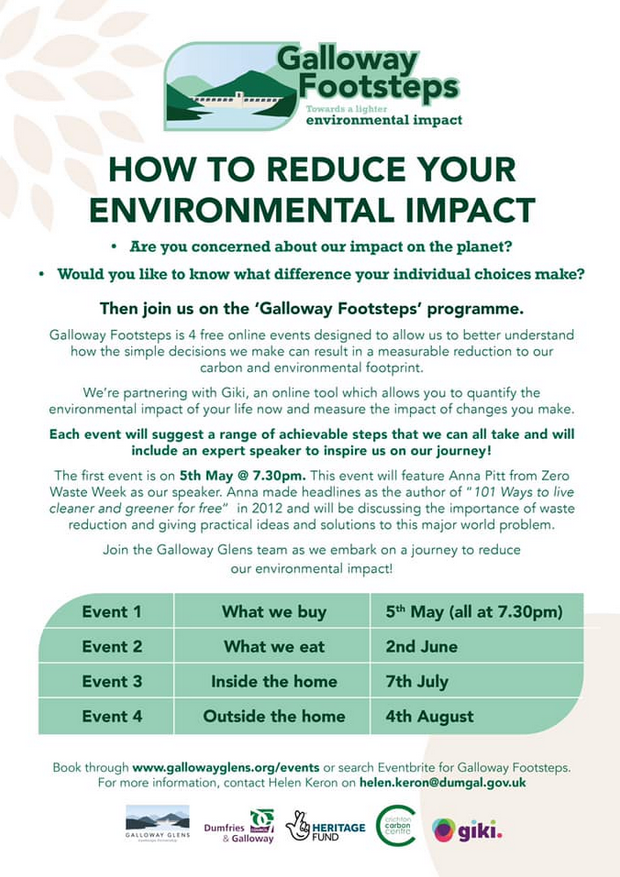