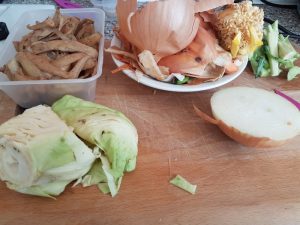 Last day of term at my daughter’s house and we had nothing much left in the fridge. A bit of cabbage, an onion, some broccoi stalks and a bowl of peels and veg offcuts: onion skin,  parsnip peel, carrot peel, potato peel, the ends of the parsnip and carrot, the end of a courgette and the core of a pepper. 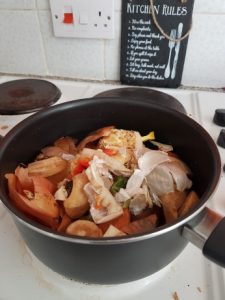 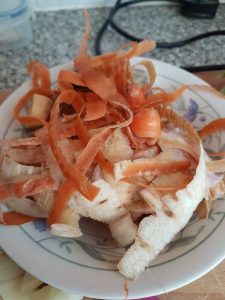 First of all I went through the bowl and took out the onion skin, the carrot and parsnip tops and the pepper cores and put these in a pan, covering them with water. I put this on to boil. I peeled the onion and added the skin to the pan.

I roughly chopped the onion and fried it in the oil left from a jar of sundried tomatoes, scrapping in all the bits of herbs too.

When the stock pan came to the boil I turned it down to simmer. I kept the onion on a very low heat and stirred occasionally. After about 15 minutes I poured some of the stock into the onion and added the peels so they would start to cook. I put more water into the stock pan as I knew there was more flavour to add and we wanted enough soup for two people for two days. After about 20 minutes the peels were soft so I whizzed that with a hand blender then added the rest of the stock. Then I tasted it and seasoned it. I do this several times… season, taste, season taste …

I like to do it gradually as you can add more salt but can’t take it away of course! 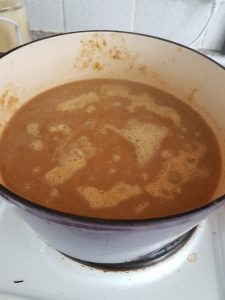 Tasted pretty much like parsnip soup. Just what we needed to warm us up while we hope for some spring sunshine.