How to encourage teenagers to recycle

Sandra wrote to me and asked:

“I have a 12 year old daughter and I would like some tips to involve her and her friends with recycling.”

As ever I reached out to our zero waste community and asked for suggestions.

Leon wrote “I think in terms of making recycling ‘cool and fun’ you won’t get very far with teenagers or anyone for that matter. It’s more about making it seem essential and easy. At the end of the day it’s like trying to get them to think putting the bins out is fun.

I’m 18 and I’ve always recycled as much as I can. My parents recycled and so it was just a case of copying what they were doing, which was not putting plastic, paper etc in the bin but near the front door to go in the blue bin.

My sister is 15 and she just recycles automatically because she is so used to it and understands the benefits. Her friends are starting to recycle more too after seeing how much we do it.

The only way I can think of that is fun is possibly collecting drinks cans to sell – although this may be difficult in the UK. I think you get like 2p per can which could add up over a long period of time.”

Suella, a teenager at heart, shared “What about a Groovy Garments or Awesome Apparel challenge? Give  anyone  a little bit  money, and challenge them to buy, exchange or invent either jewellery, or interesting garments, scarves etc. Either for gifts or them to wear personally.

You could also give them some of your own items that you no long want but haven’t yet got to the charity shop.

Could be fun if you involve their friends and maybe their parents as well.”

Katherine shared “I used to find project work was good for teenagers as they saw an outcome.

So maybe something like getting them to resource some wooden crates, helping them with how to make compost, you could even give them the challenge of making a green house from plastic bottles, and then get them to grow stuff. (Maybe they could even sell their produce).

I found a big part was helping them see that they were doing it – giving them ownership.

You could also get them to make recycled Christmas decorations to sell at a local craft fair.”

Clean up your period

Alyssa says “You can make very simple swaps in your day-to-day life to throw away less plastic when it comes to your period. Whether you prefer using tampons or sanitary pads, there is a much more eco- friendly ( and economical, and healthier!) option for you!

Disposable pads are mainly composed of synthetic fibres, plastics and wood pulp, which are then bleached with chlorine dioxide. This can remain in our bodies for years. Reusable pads are much healthier for you and the environment.”

I read some interesting information this week from Yoppie, who offer a subscription service for all your period needs. They’ve calculated that the average menstruator will generate nearly 33kg of plastic waste in their lifetime. Determined to be part of the solution, Yoppie provide 100% certified organic cotton products that are eco-friendly, biodegradable and ethically manufactured, straight to your door each month.

Lucy takes a different approach to motivate action. She said “Recycling generally isn’t fun but it is part of being a responsible person.

Might be harsh but show them some photos of cute animals strangled/trapped/injured by the stuff people throw away.

Lyn wrote “Not exactly recycling but……remember reading an article about someone who got her teens involved in making bread which they sold on a regular basis for pocket money to neighbours.

Being environmentally aware is going to be quite a sophisticated concept for some whereas financial or leisure rewards might be the trigger for others.

Our son just enjoyed the opportunity to raise his eyes heavenwards and call his dad Captain Planet! (and still does)”

Karen agreed with Lucy and shared “Lucy’s right – the everyday side of recycling is not the most exciting thing for teen.

What’s worked more for us is the understanding of the innovation beyond the bin, so it embeds an understanding that it works and that it is worth it.

My 14yo sat and watched Hugh’s War on Waste and as a result understands why I do what I do.”

We save scraps of gluing and sticking, ribbons, button shinies etc to make stuff and up-purpose it.

They love charity shops and car boot sales , we forage a lot-which they are great at- and make Jan, chutneys, syrups, tinctures.

I would say 98% of our clothes are hand me downs and they take pride in being able to get more use out of stuff. Here’s a photo of what they upcycled last night! 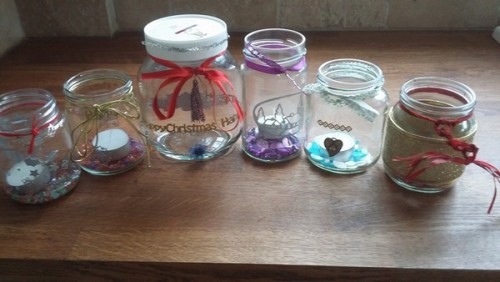 The thing they liked best was when I pulled my pen and pencil tin out of my bag and revealed that it was a reused French biscuit tin.

I had children coming up to me for weeks to tell me about salvages and makes that they had done at home.”

Be inspired by others

Mia shared “Growing up, recycling was just what we did. It was as automatic as any other chore…

Show them blogs by young adults who are striving to make a difference; such as Trash is for Tossers. It isn’t necessarily “cool” to recycle, but it is impactful and part of being a responsible human being.

Tara agreed peer influence is important and wrote “I think it’s important, specifically for teens, that they see other peers working toward the goal of zero waste and environmentally conscious.

What I personally found impactful is the story of stuff video that was shown to me when I was in middle/high school.

I think the biggest thing is appealing to different jobs/aspects of a green lifestyle. Maybe you’re not into working with those plastic bottles, but your interested in how emissions effect our air. Showing that not only is this something to just do, there are jobs and lively hoods that stem from this lifestyle I would imagine would be a motivating factor also!

My biggest suggestion is to take the focus off of recycling but the other Rs before like.. Reduce and reuse. Recycling should only be a last resort, and I think making that emphasis stronger in schools is definitely needed and would inevitably start changing a culture!”

Never watched the Story of Stuff?

Make a day of it

Ashton wrote ” Some of my friends used to volunteer to clean up waste and trash around the town.

If you make it a fun activity they can do together, like having a big dinner afterwards and watching a movie about environmentalism might be a good option.”

Meg shared “I’m torn here too. On the one hand recycling/upcycling is imbued with responsibility but also making ends meet. Lessons that are not ‘fun’ too learn but are the sooner youngsters learn them the better. On the other hand, many teens, especially youngsters, love clothes/fashions so ‘vintage’ is an angle you can use to broach recycling.

As many youngsters are often more visual than wordy, maybe get them to look at fund recycling things on Pinterest and document their own efforts on Instagram to build up their own following of recycling coolness…

Oh, and because alcohol is ‘illicit’ maybe get them involved in hedgerow foraging and wine making. A couple of sips of blackberry wine is unlikely to get youngsters hooked on alcohol but it might start to introduce a fun connection with the natural world from which an interest in recycling (and also the empowerment of making from free resources”.) Similarly supervised skip diving, maybe to find something that they can upcycle to their taste for their bedroom may appeal.”

Link to subjects of interest

Anna, who runs recycling workshops in schools, writes “My course for teens involves maths and science, to really understand why. And so far everyone who has taken part has enjoyed it and participated well. This can lead on to many of the fab design projects that can be do inspiring. I think it is really important to look at the underlying reasons for recycling and look at some measurable targets. You can have fun with that too!”

Farn wrote ” I think maybe turn it into something cool – music ‘waste’/car waste was always a big hit with us growing up. I had old registration numbers pinned to my bedroom walls (from some of the cool cars my dad owned – he had a Beetle, VW camper, Mark 1 Golf GTI convertible etc.), steering wheel clocks, an old driving seat for sitting in while I was playing my games console.

My brother was more into music though so he had an old acoustic guitar with the front off, pinned to his wall as storage for books, The front of it was painted in blackboard paint for him and his friends to draw on. Of course, we did the old-school making clocks out of vinyl records/melting them in the oven to make bowls and I saw this recently and thought it’d be pretty cool to make:

You just have to tap into their interests.

There are loads of ideas here. What do you do to get teens interested in a zero waste lifestyle?