Three ways to reduce your spending for a zero waste lifestyle 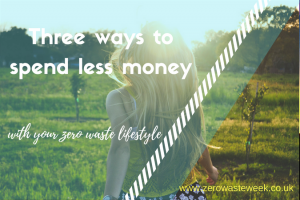 How was your #LiveMoreWithLess month?

It was a case of ‘you win some, you lose some’ for me!

What struck me most was how I’m driven by thoughtless habits. It’s was a real eye opener.

I had some fantastic emails from people throughout the month and here are three stories that inspired me.

I hope you enjoy them and they help you reduce unnecessary spending:

From spending money to priceless time together

One of the tips I gave for success was to separate wants from needs and Bev’s story illustrates this perfectly.

Bev realised that a trip to town would be much more costly than the price of a pair of football boots.

I’m sure you can all relate!

She wrote “We planned to take a visit in to town dragging my 77 year old mother with us. This would mean driving 40 minutes using petrol. There would be window shopping, lunch, dealing with half term crowds and being out for hours as mum is very slow.

There wasn’t any other reason we NEEDED to go to town.

Probably £200 later we would get home exhausted.

Instead I asked my husband to take my son just to buy boots and treat him to a milkshake.

By the time they got home – 2 hours later instead of 6 – I would have done some much needed gardening, enjoyed afternoon tea with mum and read a book I have been trying to get through for a while. I’d also cooked dinner which would include home made pizza for my son (which he would have ordered at £10 in a restaurant if we had all gone out.)

I’m patting myself on the back for stopping and choosing a more intentional and less wasteful day.”

When I suggested to Bev that another benefit might be quality one on one time for her son and husband she wrote “They did have a good time and mum and I had some bonding time too. Priceless.”

Cost and price – are they the same?

How often have you bought a ‘bargain’ only to find it’s not fit for purpose or doesn’t last?

Mariola explained that she used to focus on price and would buy whatever was cheap.

She enjoyed getting a lot for her money but realised she was buying a lot of unnecessary items.

After reflecting on her shopping habits, Mariola decided to spend more on better quality items that last.

The most powerful question to ask yourself

Joanna wanted to share what she does whenever she’s overcome with the urge to spend money on something that looks really tempting,

She asks “Did I think that I needed this item in my life before I left home this morning?”

If the answer is yes, I have been needing this for a while, then I will buy it.

If the answer is no (which it almost always is) then I do not buy it.

Going into John Lewis everything looks so damned lovely and is so beautifully arranged and presented…but how much of this stuff was I actually thinking I needed before I left the house? Probably none of it!”

Joanna went on to say (she comes from a psychological background, hence her use of mind tools in reducing her waste!) …

“Another thing I do when trying to decide whether to buy something or not, I sometimes try and visualise bringing the thing (whatever it is) back into the house and imagining how I feel when I do so.

I ask myself, am I going to feel irritated with myself when I get home for having bought this?

I also ask myself do I have space to put it or is it simply going to clutter up my house?