They say every cloud has a silver lining and I do like to focus on the positive as much as possible.

So after getting over my initial shock, fear and 2am catastrophising about Coronavirus (!), I set about thinking about some of the ways I could turn this situation into a positive opportunity.

And I decided to actually get on and do some of the things I’ve been putting off, due to lack of time.

For many of us, we now have ‘more time’ on our hands, and it’s good for an upbeat mindset to keep ourselves in a daily routine and / or to learn new things. Here’s what I’ve finally achieved over the past few weeks. All of which take me one step further along my Zero Waste journey:

We always grow a few tomatoes and potatoes but I’ve never been that committed to growing food. I’ve had the attitude that what grows, grows and if it doesn’t, it doesn’t matter because I can buy food elsewhere. With panic buying, stockpiling and supermarkets running out of food, collectively we’re finally realising that food is a precious resource and not a disposable commodity.

We started growing microgreens in the dining room! And we’ve learned that those bags of peashoots that we buy in plastic bags are, in fact, super easy to grow. I’ve also grown kale shoots, have been more vigilant about successively sprouting alfalfa and red clover. We’ve created more pots in the garden for growing food. Our neighbour has been giving us his extra plants and I’ve found a few out of date packs of seeds in the cupboard which I’m just going to sow and see what happens. This year we’re growing onions, leeks, kale, spinach, beetroot, runner beans, broad beans, lettuce, courgettes and peppers.

Apart from the courgettes, I’m going to grow all of these in containers and pots on the patio so that it’s more manageable.

Who knew a bag of flour would become such a thing of beauty?! It seemed everyone was going to be baking bread, as virtually all baking supplies ran out in the shops.

A couple of years ago I went to the effort of making a sourdough starter. I made an amazing loaf of bread which we all enjoyed but then guess what? I got busy with life again, killed the starter and never made another loaf. Yep, I feel embarrassed admitting that!

Two weeks ago I began another starter, using an old bag of flour I found in the cupboard. I admit it was nowhere near as good as the first one, but it was ok. And today I have just baked my first loaf with it. It hasn’t risen much and doesn’t have the same texture as my first ever loaf, but it tastes fantastic. Slathered with toppings or dunked in soup, it will certainly ‘stick to our ribs’ as my Grandmother might have said! 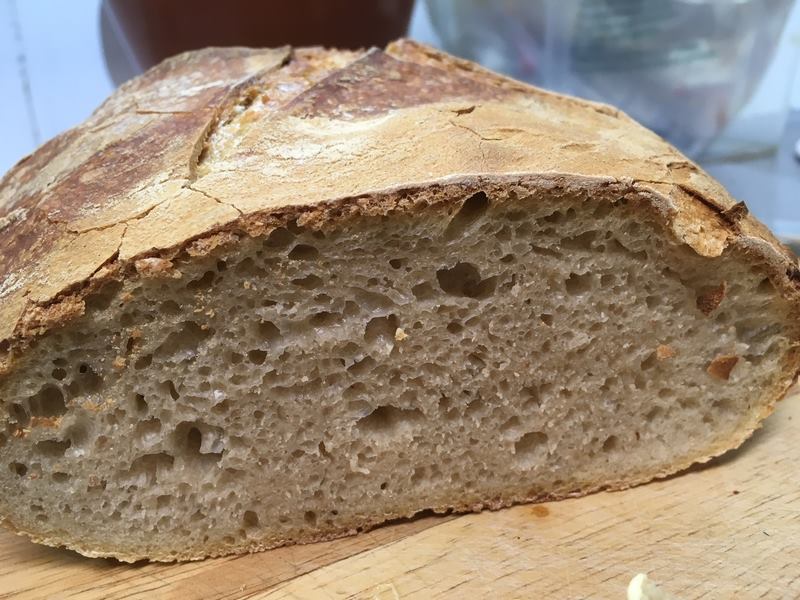 We try to run a Zero Waste office at home, and for ages now, I’ve been putting spent ink cartridges to one side, with the intention of recycling them one day. You know what happens to ‘one day’ though, don’t you? It just never seems to arrive!

Well it’s arrived here. The thing that finally convinced me, was reading on the Cartridge Save website, that while 66 million printer cartridges are sold each year in the UK, only 15% are recycled or reused. That basically means I’m in the 85% who DON’T currently recycle!

Refusing to have that on my conscience any longer, mine are now packed up and waiting a collection by courier. Our local courier is brilliant – he just picks up, signs for me and is completely contact-free, so there are no issues with me having to queue in a post office.

I’ve done it! Finally after years of procrastinating, wondering what the rest of my family would think, and concerned about explaining it to friend, I’ve made the switch to wee cloths. While some households have adopted full family cloth, I am in no way ready for that.

I tentatively mentioned it to my husband and he was totally cool with it. So much so, I wish I’d done it earlier! My daughter is ‘locked down’ elsewhere, so isn’t here to share her opinion and friends can’t visit anyway, so now is the perfect time.

Not only that, but I’ve repurposed something I’ve had for months. I was sent a set of bamboo make up wipes as a review item and, as I very infrequently wear make up, these have been sitting in my wardrobe. I figured that these small wipes, along with their handy drawstring washing machine bag would be ideal – and they are. They are so much more comfortable than toilet paper and I feel good about wasting less paper, while much of the world has gone crazy with stockpiling the humble toilet roll.

Funnily enough, switching to a reusable handkerchief was more challenging than the wee cloths. And I’m still not really sure why. I was bought up using cotton hankies as a child and thought nothing of it.

But over the years, handkerchiefs have fallen out of favour and been replaced by kitchen roll or tissues. Again, the current pandemic has made me question many of my consumption habits and the things I take for granted.

We had an old bed sheet that had worn so thin in places it was tearing, so we gave it a hand by ripping it into squares and hemming along the edges to make a pile of handkerchiefs. I have to laugh when I tell you I am ridiculously proud of my sewing. Those of you who have followed this site for some time will know it’s an ongoing joke that if anything needs sewing, it goes to my husband who is far more skilled than I am. However, I set myself the task of being handkerchief sewer and I succeeded in my task. Every time I need to blow my nose, it now brings a smile to my face. So much easier on the skin that scratchy kitchen roll too!

What about you – have you upped the ante on your Zero Waste journey since being in lockdown?