Time for Therapy? Six Ways to Deal With Eco Anxiety

I first came across the term eco anxiety earlier on this year. But I realise it’s been a ‘thing’ without a name for a while now. In fact, becoming a parent and witnessing first hand some of the devastating consequences of climate change, and wondering what the future held for my daughter was definitely a trigger for me to make some lifestyle changes.

It was then that I started to think about the amount of stuff we were consuming, (then throwing away) and how many resources we were using up. I began to question things, read labels and research.

Today is election day in the UK and many people are terrified of what the future holds. I was talking to my partner in grime, Anna, yesterday and she told me about the Friends of the Earth Climate and Nature league table.

In it, FOE ‘scored’ each of the political parties manifestos on ten areas including, climate targets, energy, transport, food and nature. The manifestos were marked out of 45 and each party scored as follows: 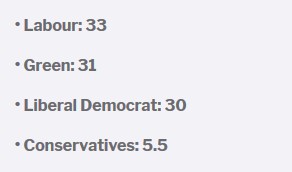 So those who have an environmental interest are obviously concerned about the outcome from today’s election.

Last year, the Intergovernmental Panel on Climate Change (IPCC) report told us we have 12 years to stop catastrophic climate change. As I write, bushfires are raging through Australia and thousands of protesters have taken to the streets of Sydney to demand urgent action on climate change. Throughout this year students across the world have stepped out of their classrooms and onto the streets to take part in Climate Strikes. Greta Thunberg was yesterday named TIME person of  the year. Extinction Rebellion have caused nonviolent disruption to compel government action to avoid tipping points in the climate system. And David Attenburgh has bought us the ‘Blue Planet Effect’ which means conversation that were once whispered in fringe communities are now heard at the school gate, supermarket queue and office water coolers.

Across the pond, Donald Trump is in denial. Brazil’s far-right president Jair Bolsonaro called Greta Thunberg a ‘brat’. She’s been accused of having anger issues. But if anger compels someone to stand up and take such heroic action, then I say anger is a good thing!

People are scared. So much so, that the American Psychological Association describe this “chronic fear of environmental doom” as eco-anxiety. Eco anxiety is not yet a clinical diagnosis, nor a disorder but it’s causing severe distress to people, including many children. When I was at primary school I used to cry myself to sleep with the threat of nuclear war. It seems that today’s threat – which is keeping children and adults, awake at night – is the threat of dwindling resources, loss of biodiversity, dramatic changes in weather patterns, sea levels rising and air pollution.

So what can you do if you’re worrying about everything? Well, the Zero Waste Week campaign is built around solutions to eco anxiety.Here are some of them:

Zero Waste Week puts you in touch with a massive community around the world who care. So you’re no longer alone. Even if your work colleagues come to work with their plastic-wrapped lunches, there’s a growing movement of people who DO care and want to find solutions. Off shoots of our Facebook group have organised meet ups to learn more and share experiences. Remember, climate change is not your sole responsibility to fathom out, it doesn’t fall squarely on your shoulders. We’re all in this together.

When we freeze with terror of get depressed we’re immobilised and that doesn’t help our state of mind. It keeps us feeling trapped and powerless. So take action, however small. You might not be able to stop bushfires, but you can do your bit in your own home. You can also make your feelings known to your local MP, employer, manufacturers and retailers.

It’s all very well to take action, but where do you start? I’m glad you asked! You start at the beginning with something small. Take one tiny step such as refusing disposable carrier bags or getting a reusable water bottle. Then when that’s in place take the next step and the next. Keep it manageable and within six months you’ll be doing great. If you want to fast track, our Waste Warriors course is a 30 day online course that will help you slash up to 80% of your landfill waste and save you £1500 per year.

It’s good to know the basic facts about what’s happening because it motivates you. But don’t dwell on it. Instead put your energy into doing what you CAN do. This isn’t about downplaying the enormity of what we might face, but it’s important  to feel good about what you can achieve. Everyone doing their small thing adds up to significant impact. That’s the very foundation on which the Zero Waste Week campaign is built.

Concerned about throw away fashion? Learn how to sew. Worried about dwindling resources? Visit a repair cafe and learn how to fix things. Wondering how we’ll feed ourselves in a decade’s time? Read some articles on growing your own food and start feeding yourself. This comes back to taking action, which is the perfect antidote to anxiety and fear.

If you’re worried about it, talk about it. Or send me an email – because you know I understand, right! I’ve worked with coaching and mentoring clients for 20 years and I’ve definitely seen an increase in anxiety and stress. It’s not uncommon for me to hear from clients that they’re scared about the future, they don’t know what to tell their children or they don’t know what to do. And the ability to speak with someone who doesn’t just understand the mind, but understands the issues is enormously helpful in gaining perspective.

And if you’re great at listening and are looking for a career change, the world needs you! This page shows you how to make a career of online therapy, so you could specialise in eco anxiety as a career. What a fantastic way to do your bit for the world!

What about you – what do you do to combat eco anxiety?