Mr Pitt has never really been a fan of the potato skin crisps I make, so the skins were often ending up in the compost these days as I can’t eat them all myself and we are not expecting any visitors any time soon! We’ve also been finding that our stocks of flour are diminishing and a couple of times there’s been none available in the shops.

So Mr Pitt decided to experiment with drying our potato peelings to see if we could make some potato flour or use the potato peel in some kind of flat bread type thing. It was all a big faff and he didn’t like the results, though I confess I tried one toasted and enjoyed it enough to immediately toast the other one and scoff that. (I blame an excess of lounge yoga and pilates for the naughty snacking – or maybe it is just that like everyone, I’m going slightly stir-crazy).

However, I immediately pounced on the next lot of potato peel and this time, instead of drying them, I went for cooking them. I am now on my second batch of the yet to be properly named potato yummies. The first batch, even though they were yummy sliced open, buttered with a slice of cheese, I wanted something that would work on their own, sort of like a cheese biscuit or savoury cookie. I’m pleased to say they were a hit with Mr Pitt too.

Here’s what I did.

Ingredients (prepare to vary according to what you have in stock but roughly!)

100g flour – the first time I used plain flour, the second time I used self raising as I am using up what I have. Both worked.

A generous twist of black pepper

To clean the potato peel I left them to soak in some water for a while – maybe an hour, maybe two. I then scrubbed the peel with my little scrubbing brush. Okay this might sound a faff and it is definitely quicker to make sure the potatoes are properly cleaned while they are whole, but maybe I was busy dancing round the living room while Mr Pitt was making dinner, so it serves me right for not helping at the right time. 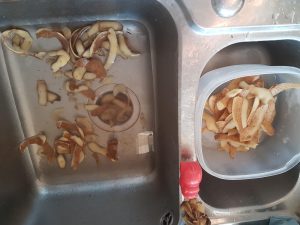 Okay, so once they are clean, cook them in some salted water for half an hour to 40 minutes, then drain them, making sure you capture the water to use for soup! The second time I forgot the salt so I just added it afterwards into the mixture. Then add 30g of butter. (Next time I’ll try a vegan version with oil.)

Blitz up with a hand blender until you get a smooth consistency like a cake mix. 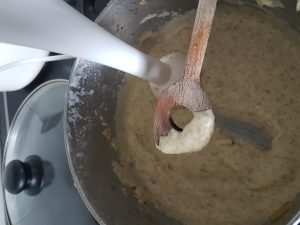 Then add in the flour and mix well,  add the mixed herbs (and the salt if you forgot to add it into the cooking water) and the pepper and mix up further.  Then make walnut size balls with two spoons and put them onto a baking tray. Cook at 180 degrees C for around 40 minutes. 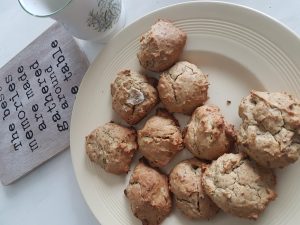 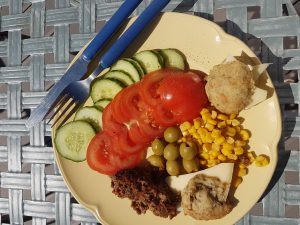 Just goes to show the appeal of peel. Way too good to waste.