Kelly contacted me last week. She was looking for ways to tenderise chicken without using clingfilm or plastic bags. Kelly said “I currently place chicken breasts between two sheets of plastic and pound it with a mallet.” She was looking for another way to do this job without using Ziploc bags or sheets of plastic, as this is creating landfill waste.

As this is something I don’t have experience of myself, I put the question to our Facebook group and they came up with 11 great suggestions:

It was suggested that Kelly could use beeswax wraps instead of sheets of plastic. Although another member said “beeswax wraps shouldn’t be used with raw meat, because they can’t be washed at high temperatures.”

Several members suggested using a silicone mat (baking sheet type) as these can be washed at high temperatures. One said that she put the chicken pieces between two silicone sheets and pounded them that way.

One member said Kelly could do away with the mallet altogether by using her hands. She said “use the heel of your hand and push down on the thickest part – works the same as the mallet.”

A few members suggested baking paper instead of plastic. One member said “Baking paper would work just as well, I’m sure I’ve seen Jamie Oliver use it for the same purpose.” Another shared this great video:

You could then compost the paper afterwards.

Use a pillow case

One member shared “On top of the cutting board that I keep only for this purpose, I use a pillowcase, double folded that I wash immediately after and keep in the rag bin.”

Use a tea towel

In a similar way to using a pillow case, another person said “I would just use a tea towel and then put it directly into the wash after to avoid cross contamination.” 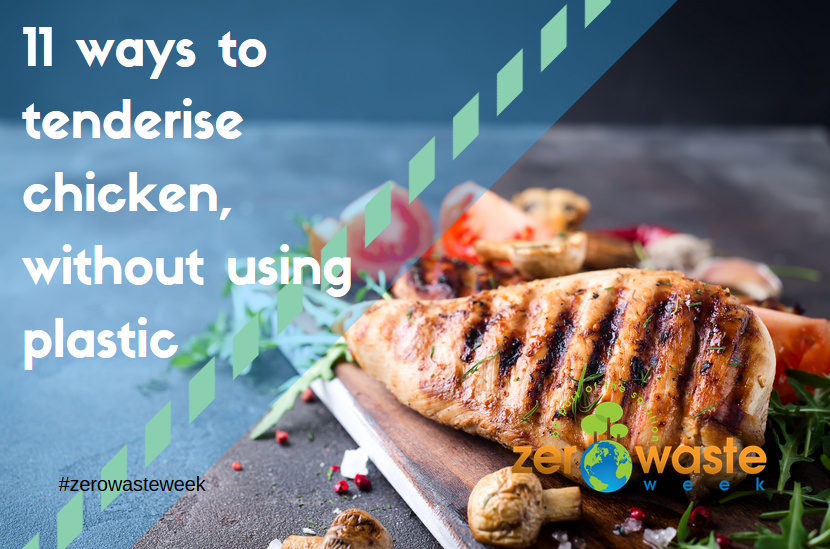 Once you begin a Zero Waste journey, the idea for many is that you start with recycling as much as you can, then gradually work your way UP the waste hierarchy to reusing and reducing. With that in mind, you can repurpose old bread bags and cereal bags for the job. One member said “I save the liners from cereal boxes, which have many uses including tenderizing meats. They are sturdy enough to handle that job.” They then throw the bags away, but at least they’ve made good reuse of them.

Reuse the same piece of plastic

In a similar vein to the members who reuse old cereal or bread bags. One member keeps a specific piece of plastic for this job. She wrote “We have a dedicated piece of plastic bag for this purpose which we wash and reuse.”

Most members don’t bother wrapping the chicken in plastic at all. And they reassured Kelly, that no, they didn’t end up with meat splattered all over the kitchen!

One member said “I bash mine with the rolling pin without any clingfilm…”
Another said “You don’t need the film, you can bash a naked breast on a board and then wash the board and mallet.”
Another agreed by saying “Just use a tenderiser on a chopping board and then clean everything very well afterwards.”
Another said “Take away the plastic and tenderize with the mallet on its own, and then sanitize it well when finished.”

The group were divided on this suggestion. While one person suggested that Kelly “Use a piece of cooking foil. This can then be washed and reused or put chicken in for cooking.” Others pointed out that the foil could tear or rip when bashed.

Instead of tenderizing the chicken, it was suggested that Kelly could butterfly (horizontally cut) the chicken breast to thin/even out the thickness.

Another person offered “If you want to tenderize the chicken you can use butter milk. Put the chicken in buttermilk or milk and the enzymes tenderize nicely in not that much time.”

What about you, do you tenderise chicken? If so, how do you do that without using plastic?