This is a blog post I wrote in 2013 following what I think was my first Zero Waste Week food waste audit.

One of the participants found she had the very same problem that I had myself when I did the Zero Waste Week food waste audit back in 2013. I had a fridge full of jars  – and no idea which of them were in date or gone past their best, or just something I was never going to get round to using.

These jars were taking up fridge space and sometimes, I realised they were causing me to waste other stuff. When I did pull one out to use it, sometimes it would get crammed in front of perishable food and I wouldn’t realise until it was too late.

So, with the help of my daughters , I set myself a challenge to use up all the jars over the next week or two, by coming up with whatever ways we could think of to use everything up.

This was one of my favourite recipes that help us use up one of my last few jars in the challenge. Here’s the blog post:

And it was an accident.

I have long been wondering what to do with a jar of fig jam I was given.  It didn’t quite work as jam on its own as it was just a bit too sweet.

Having just come back from a weekend at a friend’s house, where I’d had a slice of home-made fig roll, I decided that while the oven was on for Sunday roast dinner, I’d see if I could turn my fig jam into fig rolls.

My friend’s recipe was shortcrust pastry spread with fig paste (from the figs in her garden) and rolled.  It was lovely.

I weighed out my 100g of unsalted butter, and poured in the flour.  But in my recent cook-in with Senior Daughter to try to use up the jars that had been breeding in the fridge, I somehow must have switched over the self raising and the plain flour.  They’re stored in two different crock pots and I must admit I usually check I’ve got the right one, but must have been a little over excited at the thought of saying goodbye to another jar.  I just dolloped in the flour and had nearly put in my 200g when I noticed the bag was self-raising flour not plain flour.  Ah well, I decided not to worry about it and just give it a whirl.

Rub together 100g unsalted butter or vegan spread (cut up into small pieces) with 200g of self-raising flour until it looks like bread crumbs.  Sprinkle in a table spoon of granulated sugar for the texture.  Bind together into a dough by adding around 100 ml of water about a third at a time and using a knife to gently squish together the wet pastry into the dry crumb mix.

Using a little more flour to stop the pastry from sticking to the pastry mat and the rolling pin, roll out into a rough triangle.  Spread with fig jam and then roll up along the longest side. 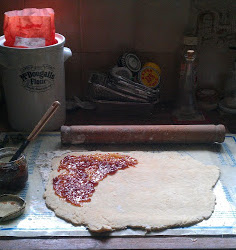 Then cook for twenty minutes to half an hour until the pastry is cooked.  My cooking times are always a little vague as I use a wood fired Rayburn.  It always cooks it but the temperature varies according to what else is in the oven, what kind of wood we’re burning and how much air we give it.  It kind of proves that you don’t really need to worry too much about times and temperatures. Just put it in and check after 15 minutes, then again after another 10 and it will probably be done. Mine needed 5 minutes more today – you can tell by the colour and texture if it is done. 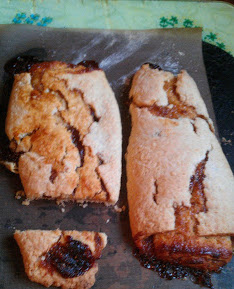 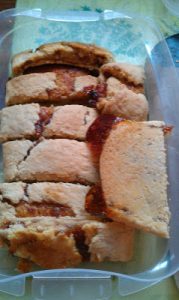